HomeAbout the CollegeHistory of OLMC

"Will go if sent" was the response from Sister Mary Clare Dunphy on June 20 1888, when asked to be the superior of a newly proposed community in the colony of NSW at Parramatta. 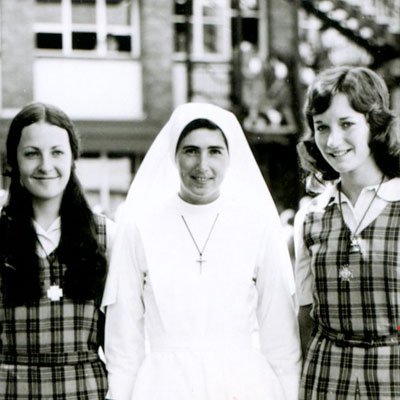 For 115 years, the leadership of OLMC was in the hands of seven successive Sisters of Mercy. This enabled the development of the strong Mercy heritage, traditions and values that remain such a vibrant part of the school mission and community today.

Inspired by an Irish spirit of adventure, nine Sisters of Mercy under the leadership of Sr. Mary Clare Dunphy, left their homeland of Callan Ireland for Parramatta at ‘the ends of the earth’, never to return.

The passion of the sisters who founded Our Lady of Mercy College Parramatta was twofold: a passion for nurturing the Catholic faith and a passion for the works of Mercy: to visit the sick and those imprisoned, to give drink to the thirsty as well as a strong commitment to the education of young women. The sisters were determined to provide girls with a wide range of opportunities which could lead to work outside the home or further education, both radical ideas for young women of the late 19th century.

OLMC was established in January 1889 with Sister Mary Alacoque Kavanagh as the founding Principal. The College was one of the first schools to register for the Bursary Endowment Act of 1912 which introduced the more competitive examination orientated approach to education with the Intermediate and Leaving Certificates. In addition, to its early emphasis on intellectual excellence, OLMC placed very high importance on music education and performance. As early as 1893, a visiting bishop claimed he had “never heard better music anywhere.” Music education of the highest standard continues to be a feature of OLMC today.

Development of the Mercy Heritage

For 115 years, the leadership of OLMC was in the hands of seven successive Sisters of Mercy. This enabled the development of the strong Mercy heritage, traditions and values that remain such a vibrant part of the school mission and community today. In 2002 OLMC was incorporated and its governance entrusted to a Board of Directors, chaired firstly by Ms Geraldine Starr and then by Ms Kerrie Walshaw. Mrs Kitty Guerin was appointed as the first lay Principal in 2004, succeeded by Mr Stephen Walsh in 2014. In 2021, Ms Lucie Farrugia commenced as the College's eleventh Principal.

Mercy Tree Previous
Sisters of Mercy at Parramatta Next